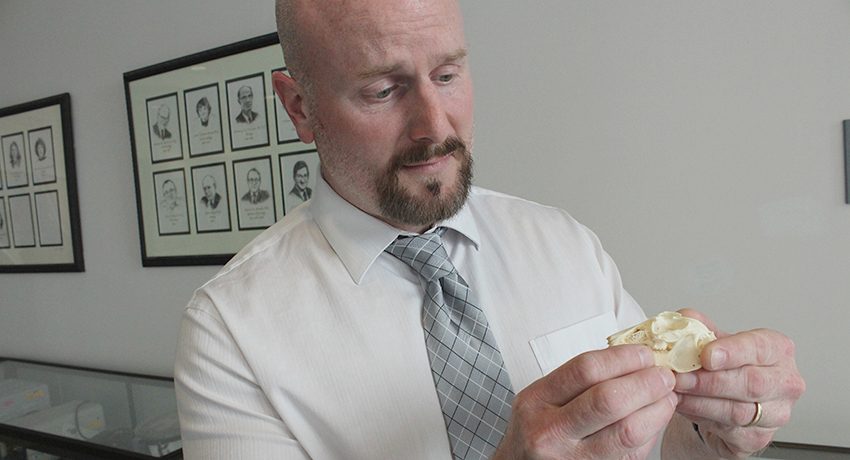 Professor of Biology Randall Tracy, Ph.D., wants to bring a new molecular technique to Worcester State University that will make it easier to track the elusive New England cottontail rabbit so that remaining populations of the dwindling species can be located.

Tracy, a noted expert on the New England cottontail and other small animal species, plans to learn the technique during his sabbatical next spring, then bring it back to the labs at WSU. The method involves analyzing rabbit fecal pellets found in the field.

“My goal is to bring those techniques to Worcester State so the students can go out with GPS units and identify locations, collect pellets, analyze them in the lab, and say ‘OK, the New England cottontail has been found in this location and that location,’ and then maybe those areas can be set aside for preservation or further study,” he said.

The pellet analysis allows researchers to distinguish between the droppings of the New England cottontail and those of the invasive Eastern cottontail, which has all but taken over the local rabbit’s once-exclusive territory.

Previously, the only way to distinguish the look-alike rabbits was to have the animals in hand for a close inspection. Doing that involved the laborious task of setting out traps and cameras in favorable-seeming habitat, then hoping a rabbit eventually came along.

“It’s all part of maintaining biological diversity, and whenever you see a species in peril, it’s good evidence that we’re doing something to the environment that’s not good,” Tracy said.

The decline also is fueled by changes in land use and competition with the Eastern cottontail, which has the advantage of being able to reproduce more quickly.

“They can crank out baby bunnies at a faster rate and so preemptively colonize new habitats faster than the native New England cottontail rabbit,” he said. “It’s kind of out-competing it by sheer numbers.”

The New England variety and the Eastern one share a common ancestor if you go back far enough in the mists of time, but during the last Ice Age the population of the ancestral species was separated into two groups. One hopped its way down one evolutionary path and the other evolved into the New England species.

The Eastern cottontail became the more dominant one, with some 15 subspecies ranging from Colombia all the way up into parts of Canada. The Hudson River Valley remained the great divide between the two groups until the 1880s, when Eastern cottontails were imported into this area by gaming clubs to augment their rabbit populations for hunting purposes.

“We had all these different subspecies interbreeding and it basically created this hybrid vigor that has spread like crazy, like most invasive species do,” Tracy said. “So now they’re everywhere.”

New England cottontails, conversely, are much harder to find. Tracy and other researchers have located a few small remnant populations in Western Massachusetts, Western and Northeastern Connecticut, and on Cape Cod.

“It would be nice to find evidence of them right in the middle of all that in Worcester County as a keystone,” he said. “That would literally bridge the gap and create kind of a corridor to all these other populations, so they don’t peter out.”

Tracy said he would ultimately like to connect WSU with Worcester Technical High School, which also has done some work in this area. Students there have collected data from analyzing fecal pellets, but state wildlife officials don’t accept the results as valid because it’s a high school.

“What I’d like to do is bridge what they’re doing with what I’d like undergraduates here to be doing and maybe we could split samples, validate the techniques they’re using, and have a collaboration where we could expand this to find out where the New England cottontail rabbits are,” he said.

If the students do find New England cottontail locations in Worcester County through pellet analysis, then further investigation can be done. The first step, however, is just getting an initial database of locations, which doesn’t exist now. After that, traps and cameras can be put out in the most promising areas.

“If we wanted to continue testing the metabolic physiology or behavioral or any other aspects of their ecology, all that could happen once we find them,” Tracy said.

About the Photo: Randall Tracy holds an Eastern cottontail skull. 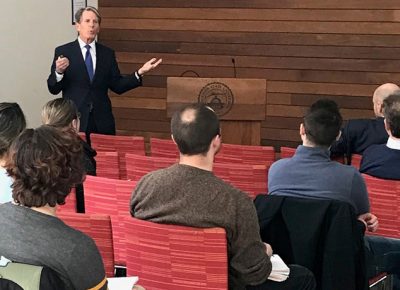 Although three people died during the Boston Marathon bombings in 2013, the fact that so many other victims survived is partly because of the extensive mass casualty training conducted by the city’s first responders and medical community, according to Ron Walls, M.D., the executive vice president and COO of Brigham Health and the Neskey Family Professor of Emergency Medicine at Harvard Medical . . .