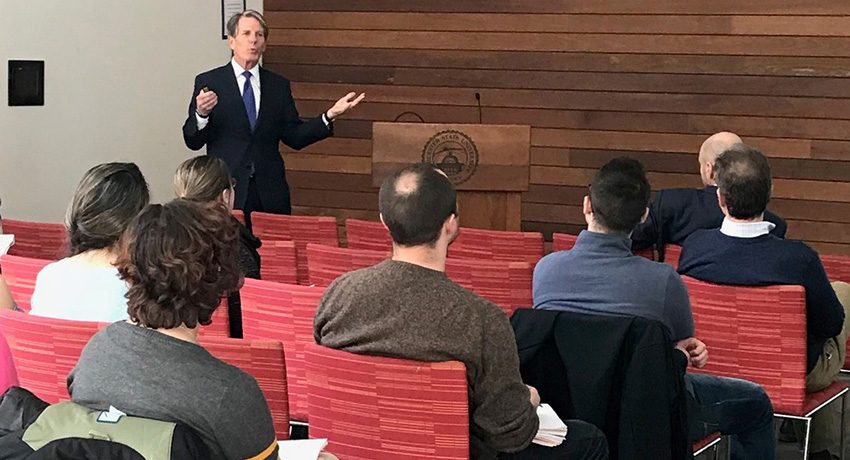 Although three people died during the Boston Marathon bombings in 2013, the fact that so many other victims survived is partly because of the extensive mass casualty training conducted by the city’s first responders and medical community, according to Ron Walls, M.D., the executive vice president and COO of Brigham Health and the Neskey Family Professor of Emergency Medicine at Harvard Medical School.

“There was a lot of luck involved, but also a tremendous amount of preparation,” said Walls, who spoke to students about what went right in the Boston Marathon emergency response as part of the Bridge to Excellence Lecture Series sponsored by the Aisiku STEM Center on March 8.

This preparation was shaped by two events leading up to the day: Sept. 11, 2001, which ushered in a new era of planning for terrorist attacks; and the 2012 mass shooting in an Aurora, Colo., movie theater that killed 12 and injured 58. Wall said that up until Aurora, he was confident his hospital was ready for a modern mass casualty event. Then he reviewed the timeline of events after that incident, which showed emergency room personnel handled an impressive 23 victims in the hour after the shooting.

“I’m looking at that timeline and I said, ‘We’ve never come close to 23 in an hour when we’ve drilled, and we’ve drilled a lot,’” he said. He checked with his emergency preparedness leaders and discovered the highest number they had drilled for was 14 in an hour. “We started saying, are we ready? Have we done enough to deal with 23 an hour? And when we did the analysis, we saw that we weren’t ready.”

So he asked his hospital board of trustees for more money, rewrote the emergency plan, and started drilling even more for the somewhat arbitrary goal of 23 victims per hour. In an eerie coincidence, when Walls reviewed the Brigham’s timeline after the Boston Marathon bombings, he discovered the hospital had successfully treated 23 patients in one hour.

Walls cited a “leadership moment” in the minutes immediately following the bombs exploding. He played actual police radio audio as personnel on the ground clogged the airways with chaotic calls for help. The clear voice of a police dispatcher ordered all units off the air and said he only wanted to hear from the area supervisor. That supervisor immediately ordered Ring Road, a vital access road from Boylston Street to Huntington Avenue, cleared for use by ambulances.

“They got 118 patients out in one hour using Ring Road to get to Huntington Avenue,” the major artery leading to all five trauma centers in the city. “If she hadn’t done that, they wouldn’t have gotten those 118 out so quickly,” Walls said.

He also cited several instances of “luck” that contributed to saving so many lives that day:

“We felt like we did a good job” in the response to the crisis, Walls said, noting that every victim who made it to a Boston hospital survived. “But the moment we got that feeling in and out of our system, the next thing is, what are we going to get fixed. I tell you that there were far more things that didn’t go right than did go right. And then you have to commit to the fixes.”

Every mass casualty event provides lessons to learn for the next one—for instance, crowd control barriers at the finish line prevented first responders from reaching victims quickly, so these barriers have been redesigned, he said.

“There were all these lucky things that fit together,” Walls said. “As we went through all this, as we did our after-event analysis, our approach was, ‘How would we have to prepare so we didn’t need all this luck?’ It’s been almost five years now and we still haven’t answered those questions. Our goal is to eliminate the luck.” 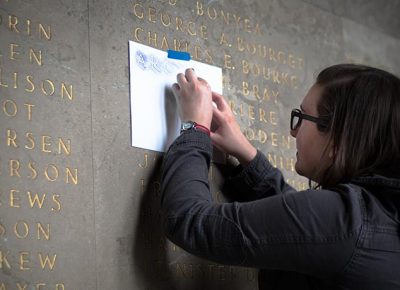 World War I was an 18-month war that is perhaps the one least remembered in America. We entered World War I on April 7, 1917, and we lost 116,000 soldiers the final year of the war. Sadly, pieces of history are starting to fade away and be forgotten. Linda Hixon, a Worcester State University adjunct professor of history, and her class have dedicated their time and effort to restoring some of . . .