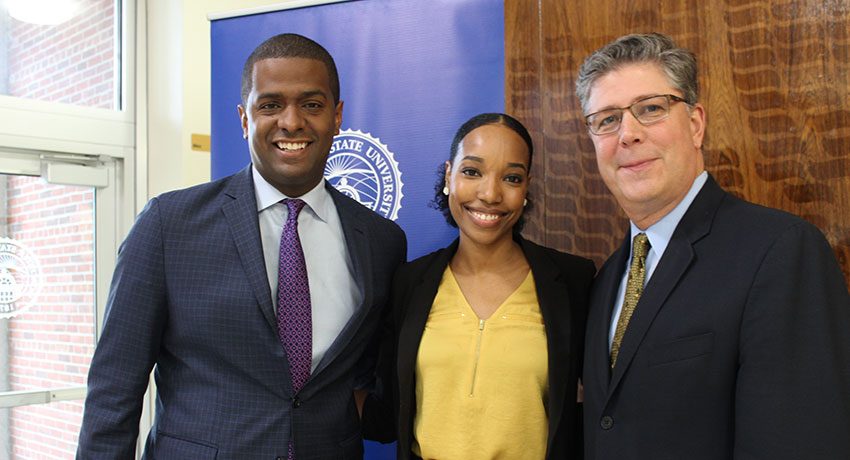 At age 22, Bakari Sellers was the youngest African-American elected official in the nation when he defeated a 26-year incumbent to win a seat in the South Carolina State Legislature in 2006. He stepped away from politics after 10 years, and now, at age 34, he can reflect on finding common ground with people who are decades older.

Sellers shared many of those experiences, including what it was like being on stage with celebrities such as Kerry Washington, Barack Obama, and Usher, when he gave Worcester State’s fall Diversity Lecture on Tuesday, Nov. 13, in the May Street Auditorium.

Since leaving politics in 2016, Sellers has been a commentator for CNN, with whom he signed a new two-year contract recently. He has been named one of Time magazine’s 40 Under 40 and one of The Root 100’s Most Influential African Americans in the nation. (Read here for a more complete bio.)

Despite his youth, Sellers knows what it means to be civically engaged and politically active, President Barry M. Maloney said, in his opening remarks before Sellers took the stage.

“Listening to others and learning from them is an important first step,” Maloney said. “And yet in order to make ours a welcoming, inclusive campus, we can’t just say, ‘Well, those groups, whoever they may be, they’re covering it,’ or ‘I support what’s going on. I support what they’re doing.’ Support means taking action, too.”

Sellers, the son of venerated Civil Rights activist Cleveland Sellers, suggested that the audience ask two important questions about diversity and inclusion in America today: “How far have we really come?” And, “Where do we go from here?”

“If you understand and use some historical context, you’ll come to the conclusion that we’ve made progress but still have yet a ways to go,” he said. Sellers detailed some of that history through the story of earlier Civil Rights struggles, many of which involved his father on the front lines. He also urged audience members to “dream with their eyes open,” by a holding a larger vision of what it is possible for them to be and do.

Believing in just such a vision is what ultimately landed Sellers on a stage in front of a roaring crowd when presidential candidate Obama held a rally in his district, in a hall near where Sellers had grown up. The location was also close to where his father had been shot decades earlier during the “Orangeburg Massacre,” South Carolina’s bloodiest Civil Rights protest. The Obama rally was planned during the run-up to the 2008 election after the then-senator from Illinois sought Sellers’ endorsement in a surprising phone call.

“I answered the phone and they say, ‘Do you have time to speak to Senator Obama?’” Sellers said. But the out-of-the-blue call from such a prominent person led to a small brain freeze. “I picked up that phone and the first thing I say is, ‘I’m on my way to constitutional law class,’” Sellers said, forgetting that Obama had been a constitutional law professor. “He starts peppering me with all these questions about what we were reading and where we were. I was like any other very good law student, which means I hadn’t read all that stuff. I’m, like, ‘Senator, let’s kind of get through this.’ Then he said, ‘Well, now is the time that I want you to endorse me to be president of the United States.’ I say, ‘Senator, I’ll do so under two conditions: One is that we get my mom out of the house and she can work on the campaign, and, two, you’ve got to come to my district. He says, ‘done and done.’”

When rally day came, “I go out (on stage) and it’s crazy,” he said. “It’s pure pandemonium. People are pulling on you. There’s Secret Service everywhere. You’re autographing babies. It is insane.” Sellers spoke, drawing on Martin Luther King’s “I Have a Dream” speech, then turned around and introduced actor/comedian Chris Tucker.

The crowd was so loud by then that all Sellers could hear was a buzzing in his ears and that’s when someone took a photograph that quickly gained national exposure. “To my left is Chris Tucker, to my right is the (eventual) 44th President of the United States. To his right is Kerry Washington and to her right is Usher Raymond. It was in Us and People magazines. It was everywhere. We were on E, all of that stuff,” Sellers said.

People always ask him what he was thinking at the moment the widely circulated photo was taken, and he remembers clearly what it was.

“It was that I was 23 years old and that I was 19 miles away from where I decided to dream with my eyes open and had the audacity to believe that I could be a part of something larger than myself and run for office,” he said. “I was 300 yards away from where my father was shot and the blood of my family literally ran through the soil and without those individuals paying the ultimate sacrifice, I would not be on a stage like that.”

The Diversity Lecture Series is sponsored by the Office of Student Involvement and Leadership Development; Student Events Committee; Diversity, Inclusion, Affirmative Action, and Equal Opportunity Office; Residence Life; and Counseling Services. Another lecture is being planned for the spring. 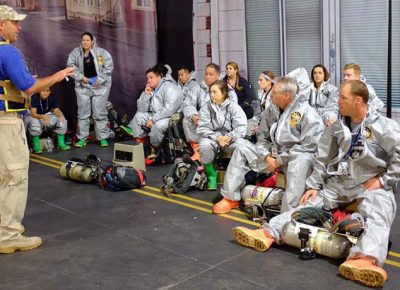