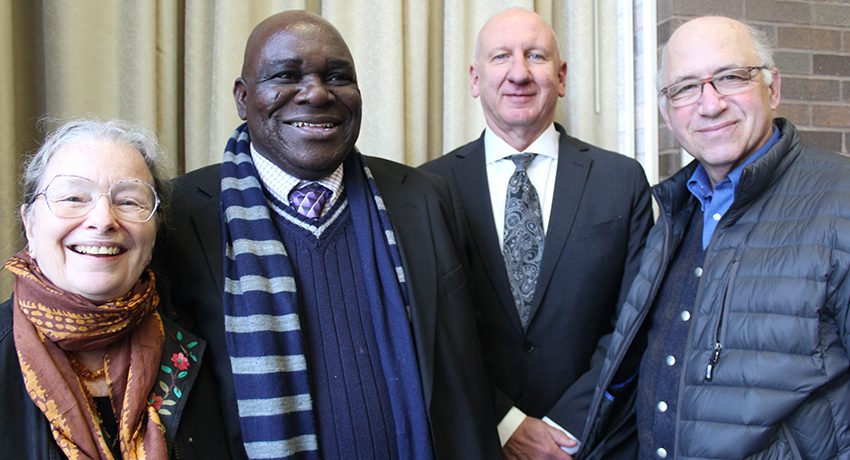 Theatre for Development Can Help Main South and WSU Communities

Visiting Professor Marcellinus Okhakhu, Ph.D., applied the principles of Theatre for Development to the Main South and Worcester State University communities and concluded that WSU should continue to use “TfD” to address the concerns and potential solutions that such participatory, interdisciplinary theatre can reveal.

Okhakhu, from the University of Benin in Nigeria, concluded his semester at Worcester State with a talk for the university community on December 7. His topic, Theatre for Development and the Worcester State Experience, reflected his expertise as a faculty member in his home university’s Theatre Arts and Mass Communication Department.

He applied the principles of TfD, which he described as “interactive, collaborative, and interdisciplinary,” to the challenges faced by the city of Worcester and by Worcester State. Okhakhu explained that TfD is “theatre that includes the community in which the theatre is in,” and explored how the Worcester State community can use such theatre to goad audiences toward “participatory action,” such as what’s being done with via the CitySpeak project.

Okhakhu said one focus was with residents of the Main South neighborhood of Worcester. He said those residents’ perception is that the university located in that community, Clark University, “is not addressing the problems the community feels it has.” Even though Worcester State is not physically located in that neighborhood, he said that universities are “universal cities” and for that reason, must involve themselves in the life of the Main South area.

He said the CitySpeak and TfD approaches are better ways to bring the community to participatory action. He outlined six factors to consider in engaging the community in uncovering what concerns are most important to them, as well as to surface potential actions that might address those concerns.

Okhakhu also said that the community perceives that the city of Worcester is not “in tandem with what is needed” in their neighborhood, either. He concludes that WSU has “chosen… to intervene in the life of the city, and particularly in Main South, through the CitySpeak program” taking “a major step in implanting [our] imprimatur on the wellbeing and development” of that area. He said that much more can be done, and that WSU “must step up and take charge.”

As for Worcester State, Okhaku also had his students develop an instrument to gather data from their fellow students as well as faculty to identify areas of concern on campus. They identified 13 concerns, then dramatized these concerns via the Theatre for Development performance of “Everyday Struggles.” The performance involved the audience, via a narrator who periodically stopped the performance to interact with the audience, thus clarifying some of the problems as well as highlighting some proposed solutions to them. The process of this interaction, said Okhakhu, leads the participants to re-evaluate the issues and their involvement in them, which, in turn, leads to the desired change.

Okhakhu concluded by urging that CitySpeak involvement in both the Main South and WSU projects continue, and that WSU offer institutional support to these projects. He believes that WSU’s participation could have a “ricocheting effect on the world,” giving “inspiration and impetus to other colleges to see the need to give back to society.”

The lecture was the first in the newly established School of Humanities and Social Sciences Dean’s Visiting Scholar Series. According to Dean Russ Pottle, the series is designed to “give our visiting scholars a chance to share their insights with the university community as well as the classes that they have involved.”

Marcellinus Okhakhu, second from left, is joined by, from left, Jean Borgatti, Ph.D., from Clark University, who served the University of Benin as a Fulbright scholar, Dean Russ Pottle, Ph.D., and Adam Zahler, MFA, chair of the Department of Visual and Performing Arts. 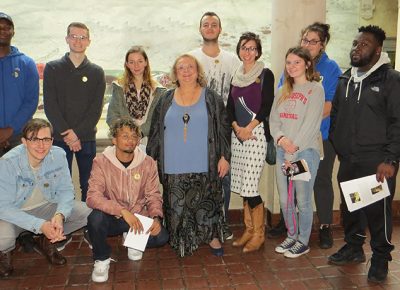 Several Worcester State University professors stepped aside for one or more class sessions this semester so their students could hear stories of art, history, and culture told by docents at Worcester Art Museum and Worcester Historical Museum. It was part of WSU’s ongoing effort to forge stronger student connections with educational resources in the city of Worcester, including the Worcester . . .