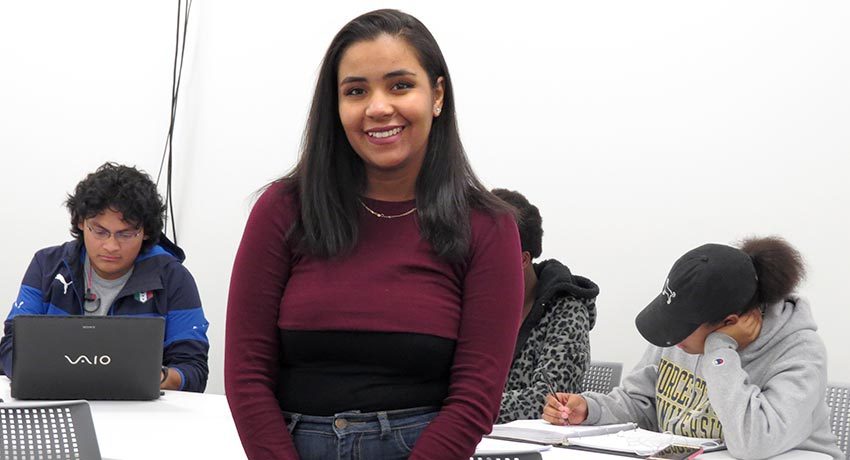 Senior Vanessa Laracuente has made positive contributions to Worcester State University’s campus climate through her involvement with Third World Alliance. She took that to a national level recently when she attended the inaugural Intercollegiate Diversity Congress Summit.

The Intercollegiate Diversity Congress Summit was hosted by the University of Southern California Shoah Foundation as part of its Countering Antisemitism Through Testimony initiative. The foundation, which was founded by Steven Spielberg following the release of his film “Schindler’s List,” provided resources and training for the student leaders who attended the summit.

Worcester State was asked to send a student by Sara Brown, a teaching fellow at the foundation who coordinated the conference. She once taught at WSU as an adjunct faculty member and was a guest lecturer in Associate Vice President for Academic Affairs Henry Theriault’s philosophy classes, and she also served on a campus-wide panel on mass violence while working on her doctorate at Clark University.

“She consistently praised Worcester State and our students. She thought they were really interesting,” Theriault says. Worcester State would not have been on the radar of the USC Shoah Foundation otherwise, so Brown advocated for a spot for a Worcester State student.

Laracuente, a dual major in education and sociology, was selected by Assistant Dean of Multicultural Affairs Marcela Uribe-Jennings and Assistant Director of Multicultural Affairs Laxmi Bissoondial because of her “tremendous background” in addressing problems with campus climate, Theriault says. She had a strong interview with the USC Shoah Foundation and earned one of the 20 seats at the summit.

“I have many opportunities to work with scholars and organizations around the world,” Theriault adds. “I feel so good when one of them wants to involve our students and they perform at such a high level and make an impact on these big stages. It makes me proud of our students and what we’re all doing on campus to support them.”

“I was honored and felt very humbled to be chosen,” Laracuente says. “It made me aware that people notice the little things that I do.”

Summit participants were introduced to Shoah Foundation’s IWitness educational website, which “provides access to more than 1,500 full life histories, testimonies of survivors and witnesses to the Holocaust and other genocides,” according to the IWitness website.

Laracuente’s experience at WSU enabled her to make “dynamic” contributions to the discussions at the summit.

“We looked for testimonies that we felt we could relate to on our campuses,” she explains. The goal was for each participant to develop a project that would address forms of discrimination on their campus.

“It was helpful learning how to navigate through issues, how to talk about things, and the power of storytelling,” she says. “That’s something that’s really important that I would definitely utilize in my classroom settings.”

Laracuente is planning to create a video with testimonies of at least 100 students “about their experiences and whether they’ve ever felt a time when they did not feel included. I want to focus on any type of minority group on campus and align that with” President Barry Maloney’s Five Points of Action. Theriault, who is providing support to her for the project, agrees.

“I want Worcester State to be viewed as a school that identifies its problems and then tackles them and moves forward instead of saying, ‘Oh no, this doesn’t exist here,’ because we know that it does,” she says.

“I’m aware that these are very sensitive topics,” Laracuente adds. “We need to give that safe space, but also that brave space for students to be able to talk about these things on campus.”

Theriault adds, “This campus has never shied away from talking about the tough issues facing our campus and our world. Given where our country is at with regards to talking about tough issues, this is an opportunity to lead in that conversation.”

At this point, Theriault’s involvement is helping to connect Laracuente with technical resources on campus.

Librarian Honors WSU’s Past by Building an Archive

Ross Griffiths is gentle when handling a pair of 88-year-old, off-white silk stockings, one of the more unusual artifacts in the nascent but growing Worcester State archives. “There are many ways these tell the story of Worcester State,” he says. A short note from the former owner explains why these simple leg coverings were meaningful to her: “My first pair of real silk stockings, worn . . .