The Sky Won’t Be the Limit for Adam Straughn ’14 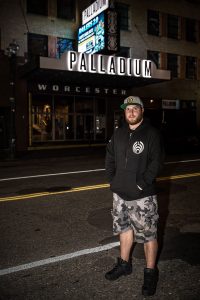 Adam Straughn ’14, is a music producer, photographer, and founder of the clothing line Above The Sky Productions. His music festival Heavy Fest comes to the Worcester Palladium on Saturday, Nov. 10. Straughn, an English and communications double major, was a Presidential Student Ambassador, a Writing Center tutor, and was named to the all-MASCAC academic team four times. He also won third place in the Robert K. O’Brien ’58 Next Big Idea contest.

My professional career seems to be constantly evolving. When I first came to WSU I was a guitarist in a metal band and I thought that may have been the direction my career was headed. I pursued music for some time while at WSU but my interests seemed to quickly shift toward event production and marketing. I began producing some shows at venues and clubs in the city, which was a fun way to learn the ins and outs of running a business. Then I started taking photography seriously my senior year and I found that I had some good opportunities to climb up the ladder fairly quickly. After graduation, I travelled internationally taking photos for music festivals and toured the country with bands and DJs. After half of a decade working in the music industry, I have now found myself into a position to do something even bigger! My longtime dream of producing a music festival of my own has finally become possible this year thanks to years of networking and some recent success with my clothing brand. It really means a lot me for this inaugural event to be happening in Worcester, where this exciting journey began.

I began making merchandise, specifically high-quality jerseys, for bands and DJs as a hobby back in 2013, but after word of my work spread throughout the music community, that hobby quickly became a full-time job. I founded my brand, Above The Sky Productions, and it quickly became a well-known name throughout the industry. I was fortunate to form partnerships with some very well-known artists, many whom I worked for as a photographer in the past, and the brand became a continued success. My focus has been on the merchandise brand more than the photography as of late, but I wear both hats often. Both careers have a symbiotic relationship, as many of my clients for each service are the same.

It’s hard to pick just one way WSU has influenced me, but I always love sharing the story of how my photography career started. As part of my communications degree, we took an EcoTourism class in Costa Rica, which required us to use a camera in manual mode in order to tell a story. This forced us to learn the skills necessary to capture a quality photograph and that was a crucial step in my journey. I’m not sure if I would have fallen in love with the craft if it weren’t for that trip. I’ve also had some amazing professors who have become life mentors and friends and whom I still talk with to this day. The knowledge I obtained while earning my two bachelor’s degree have proven to be invaluable many times over.

Right now, all my energy is dialed into my music festival, Heavy Fest, which will take place on Saturday, Nov. 10, at the Worcester Palladium. Producing an event of this magnitude takes a lot of work, with endless communication, planning, and a whole lot of sacrifice. It’s also a huge risk because you have to rely on people to purchase tickets, which is never promised! However, I think it’s a gamble I’m willing to take in order to bring my vision to life. The concept combines three usually distinct genres of music—dubstep, metal, and hip-hop—into one lineup, which has never been done before. In many ways, the festival is a reflection of my own personal journey through music, which I feel a strong urge to share with others. Despite some doubts from critics, I believe it’s going to be something that makes waves throughout the music industry.

The last time I spoke with Worcester State for an article, I said, “You have to be open to everything” and I think that still holds true, especially with Heavy Fest featuring such an eclectic lineup. I also said, “You have to give it your all to get to the top,” and although I don’t know just what “the top” entails just yet, I can certainly say I’ve been giving it my all. This event is a culmination of years upon years of hard work and I’m excited to bring everything full circle by producing an event in the city where this journey all began.