Students and Presidents of the HECCMA Campuses Meet with Legislators

Students, presidents, and other campus leaders representing eleven Worcester-area colleges brought their concerns to legislators at the Higher Education Consortium of Massachusetts’s second annual “Day on the Hill”  on June 20.  Those from the colleges joined regional elected and business leaders in making the case for state support for higher education. 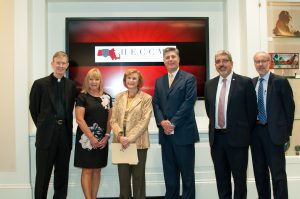 Speaking to the group from Central Massachusetts was Senate President Harriette L. Chandler of Worcester,  who said, “You make such a difference, and hopefully some of your students will stay on and become the leaders of tomorrow in Central Massachusetts.” She and her office helped organize the event, as well.

Worcester State University President Barry M. Maloney, who chairs the HECCMA board, said that the colleges, with more than 30,000 students and thousands of employees, help drive the regional economy. Tim Murray, president of the Worcester Regional Chamber of Commerce Tim Murray and Quinsigamond Community College board chair, Sue Mailman, who is also a business owner, emphasized the importance of business and educational partnerships and of educating the future workforce.

Other speakers included City of Worcester Mayor Joe Petty and two Worcester Student Government Association board members from Assumption College, Lily O’Connor and Jillian Geyster.  The students addressed issues of concern to them, including the need for more financial aid from the state and for better transportation options. The speaking program preceded visits with senators and representatives.

“This event was important for HECCMA members,” said Jeanine Went, Ph.D., HECCMA’s executive director.  “While there, college representatives and community partners had an opportunity to demonstrate how higher education serves as a significant economic force in Central Massachusetts.  It is important that key decision-makers and policy-makers understand the value higher education brings to our region.”