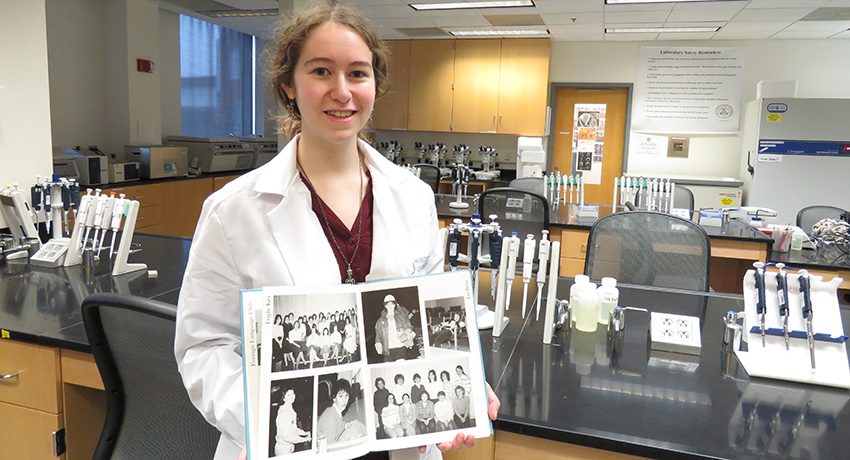 Junior Sarah Cross shares more than just DNA with her mother. She’s also an aspiring biologist and president of Worcester State’s chapter of Beta Beta Beta, one of the few chapters of the biology honor society at area colleges.

Cross’ mother earned her bachelor’s degree in biology from Trinity College of Vermont and led its chapter of TriBeta, the honor society’s commonly used name.

“So I’ve grown up hearing about TriBeta and hearing about what she did,” Cross says. “I just assumed when I went to college to get my degree in biology, I would be a member of TriBeta.”

That chance finally came at the end of her first year at Worcester State, when she was invited to join. And at the end of the 2017 spring semester, she was elected chapter president.

As president, Cross has sought to raise the honor society’s profile on campus and develop programming that’s relevant to members. She considered setting up events with other chapters and was surprised to find none in the Worcester area. (The closest college with a TriBeta chapter is Framingham State University.)

“So it happened that the school I picked had exactly what I needed and wanted,” she says of TriBeta.

The honor society began the academic year with a successful fundraiser at Family Weekend and hosting a “welcome back” ice cream social for members, Cross says. In addition, the leaders organized a speaker series devoted to research. The first two speakers were Professor of Biology and Department Chair Steven Oliver, Ph.D., and Assistant Professor Roger Greenwell, Ph.D., one of TriBeta’s faculty advisors.

Students also should know about the research their fellow students and professors are doing, says Cross, who received The Lt. Col. James F. Sheehan ’55, USMC Ret. Award her freshman and sophomore years. The speaker series “is a good way for students to learn which professors are doing research and what kind. And should any students want to get involved in research, they would then know where to turn.”

Cross and other TriBeta leaders, Vice President Paul Koffi, Treasurer Diego Urbina, Secretary Megan Rouillard, and Historian Polina Zhdanova, hold meetings that offer members the chance to step away from the classroom or lab and discuss things that are happening in the field of biology.

“Students are learning at a fast pace in biology through classes, labs, and getting involved in research,” she says. “The meetings give our members another chance to talk about what they learn and other topics in science that excite them.”

Cross also has been encouraging TriBeta members to consider presenting their research projects at Beta Beta Beta’s National Convention on May 30 through June 3 hosted by the California State University, Monterey Bay chapter.

The time and effort Cross puts into leading TriBeta is enriching the bond she has with her mother. “Now I’m able to talk to her about, ‘Hey, here’s what I’ve gotten done and here’s what I’ve accomplished,’” she says. “I’ve learned from her stories. But it’s nice to be able to create my own.”

About the Photo: Sarah Cross holds her mother’s college yearbook in one of WSU’s science classrooms.

The spring semester never fails to present a challenge to students and faculty—the changing of the seasons, warm summer days just on the horizon, and of course, graduation—all of which seem to compress the time available to prepare for the rapidly approaching finals in May. It is not uncommon for stress among students and faculty to mount, even as anticipation of a break grows. Along with . . .