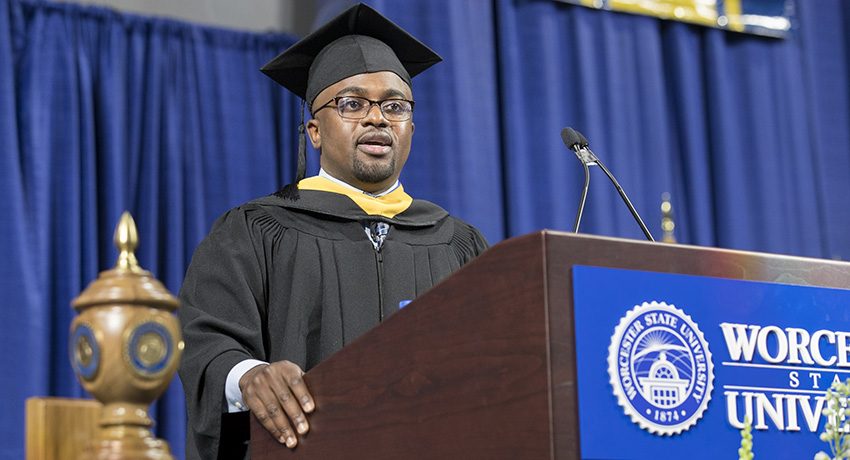 Alumnus Tells New Graduates to Remember the ‘Currency of Sacrifice’

Before receiving an Inspirational Alumni Achievement Award, alumnus Eugene Bah ’12 encouraged the graduates present at undergraduate commencement on Saturday, May 19 to remember “the currency of sacrifice” on behalf of others when they feel overwhelmed by their “struggles out in the ‘real world.’”

Bah grew up in a remote village in Cameroon, and when members of his family needed medical treatment, they would have to travel 30 miles to the nearest clinic, which was staffed only by a visiting nurse. This experience led him to pursue a medical career.

Bah graduated from Worcester State with a bachelor’s degree in chemistry and is now in the Mayo Clinic Medical Scientist Training Program, planning eventually to go into neurosurgery and to perform in-depth research. His oral Ph.D. qualifying exams are scheduled for this Friday, May 25.

He admitted to planning to skip his commencement. When he told his mother, Edith, she instructed him to order a gown “one size bigger” so that she could walk across the stage in his place. “‘I will walk on that stage for you to make sure you are duly represented,’” she told him.

Bah also admitted to pondering why members of the Class of 2018 would be interested in hearing from him at commencement.

“I couldn’t even give you advice about how to be a professional success because I’m only halfway through my own doctoral education, and I haven’t figured things out yet!” he said. “I still get apprehensive about my future; I still get unsure about my own abilities; and I’m constantly worried about my direction in life.”

Bah gave credit for the moment—and all that led to it—to his mother, who struggled in Cameroon and then in the United States to improve “her station in life” and create “a better future for her son.”

“Some people hear that I am pursuing an M.D. and a Ph.D. degree and think that I must work hard. I certainly try to,” he said. “But I am acutely aware that even my hardest day of work pales in comparison to what my mother had to deal with through those long years.”

Bah also gave his mother credit for teaching him “that struggle is worthwhile when we do it on behalf of others” and acknowledged those graduates who were there because of someone who had sacrificed for them.

“While today is a celebration of your accomplishments, it is equally a recognition of the sacrifice of those around you,” he said, encouraging the graduates to applaud the audience.

Bah praised the hard work of graduates “who have overcome innumerable barriers or severe trauma to be here today with very little support from others. In you, I see the strength and ambition of my mother.”

Bah closed with a story of the first patient he met in medical school, a young girl with an untreatable type of brain cancer coming to see her physician at Mayo Clinic. Even though she “was being transitioned to palliative care,” she was talkative and vivacious.

“Despite the grim prognosis and the fact that I was a complete stranger meeting her for the first time, she took the time to make an owl out of a paper plate and Styrofoam pieces for me,” he said. “She ran out of parts to make two eyes, and so decided to just make a one-eyed owl, with just Styrofoam pieces as eyelashes over the side that didn’t have the eye. And when I asked her about it, she said the owl was winking!”

Today, Bah is “attempting to make a virus to decimate brain cancer” at the Mayo Clinic.

“I know that the long hours in the lab, the failed experiments, and the disappointing results may one-day lead to a discovery that others can build on to prevent suffering,” he said, adding that the “one-eyed owl hanging on my bedroom wall” motivates him “during times of adversity.”

View the livestream recording of the entire commencement program. 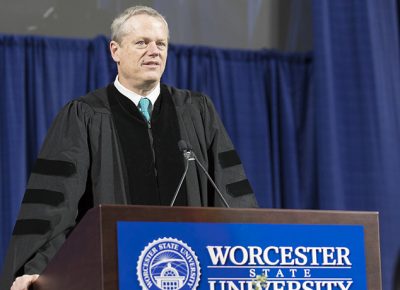 Governor Charles Baker Jr. offered Worcester State University’s more than 1,200 graduates five pieces of advice to lead healthy, productive lives during the undergraduate commencement on Saturday, May 19. “I hope that at least one of them will stick with each of you,” he said. 1. Life is a team sport. “I don’t care if it’s a possé, a spouse, a soulmate, or a partner, or a . . .