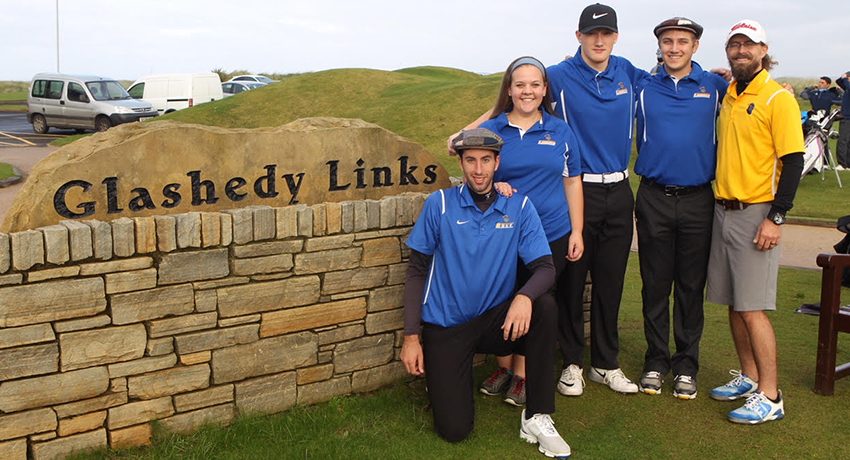 WSU Golfers Travel to Ireland to Play in Invitational Tournament

The tournament is affiliated with a long-standing annual event honoring the late U.S. Speaker of the House and Massachusetts Congressman Thomas P. “Tip” O’Neill. The WSU golf team was invited to send a foursome and coach.

The event was held on the Glashedy Links Course, which has been a European Tour Venue and will serve as the host venue of the Irish Open 2018.

The course is about an hour north of Worcester State’s exchange partner, Letterkenny Institute of Technology. The Ballyliffin Golf Course in County Donegal is composed of two Championship Links Golf Courses: Glashedy Links and Old Links.

The foursome departed from Massachusetts on Thursday, October 19 and arrived in Dublin early Friday, October 20. They had a two-hour drive from Dublin to the site of the tournament in Donegal.

During the day, participants were able to take in the sites in Letterkenny and see much of the countryside in Northern Ireland. In the evening, all participants were asked to attend a Gala with County Donegal and the O’Neill award hosts in the evening. This event recognizes the achievements of the Irish Diaspora in their chosen fields and celebrates the global impact of the Irish people everywhere and their maintenance of links with Ireland.

This event recognized four individuals who are the recipients of the Tip O’Neill Irish Diaspora Award for 2017. In addition to recognizing these individual achievements, this is intended to draw focus to tourism in Northern Ireland.

On the day of the tournament, the foursome competed against teams from St. Peters (New York), Letterkeny Institute of Technology, and Magee University from Northern Ireland. An official dinner and prize-giving ceremony open to all participants and teams followed the event to conclude the day.

On Sunday, October 22, the Worcester State Golf Team members departed Donegal for Dublin, where they were able to enjoy some sightseeing and touring throughout the city.

They spent Monday, October 23 playing a second round of golf in Dublin, touring of the city, which included many of the sites Dublin has to offer via a sightseeing bus, and enjoying an Irish cultural activity in the evening after a traditional Irish dinner at the Arlington Hotel.

The trip concluded when the team departed back to Massachusetts on Tuesday, October 24, and is certainly an experience the players will never forget. 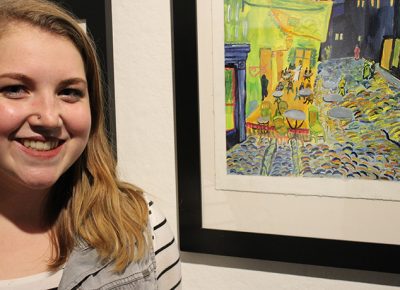 From Trash to van Gogh, Students' Art Reflects Their Inspirations

Student creativity makes for an impressive display in the Mary Cosgrove Dolphin Gallery through November 16. The biennial Student Art Exhibition highlights the wide range of work being done in Worcester State University’s Visual and Performing Art Department’s studio classes, including painting, drawing, print-making, photography, video, and sculpture. “It shows that our students are . . .