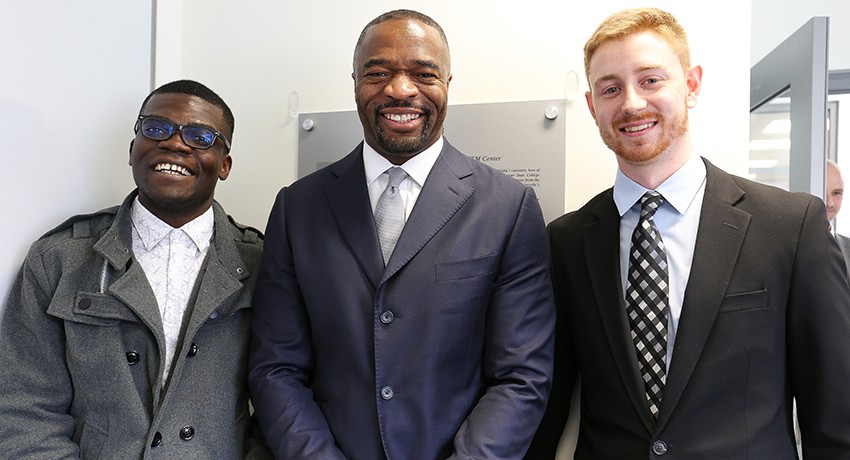 Worcester State University has named its Center for STEM Research and Education in honor of alumnus Dr. Imoigele Aisiku, M.D., ’92, an intensivist (critical care) and emergency medicine physician who attended public schools from K-12 through medical school. The naming recognizes a $1 million gift from Dr. Aisiku, which will be used to provide experiences for Worcester State students that can help them compete for top graduate schools and careers as well as advance research in science, technology, and health fields.

Dr. Aisiku, who practices in the Emergency Department at Brigham and Women’s Hospital in Boston, a teaching affiliate of Harvard University, joined members of the Worcester State University community to announce the details of the gift. The University unveiled a plaque in Room 100 of the University’s Ghosh Science and Technology Center, naming the space the Imoigele P. Aisiku, M.D., ’92 STEM Center.

“This gift is intended to create and motivate the next generation of future leaders,” said Dr. Aisiku. “I am excited to invest in Worcester State students, to further their research opportunities with WSU faculty. This gift can offer WSU students the kind of experiences—like a paid post-graduate research year—that can level the playing field for them in applying to top graduate schools in science, technology, medicine, and health.”

“Dr. Aisiku’s story illustrates that a Worcester State education can prepare you to achieve your dreams, and his gift ensures that more of our students will be able to achieve theirs,” said President Barry M. Maloney. “We cannot thank Dr. Aisiku enough for his extraordinary generosity.”

Thomas M. McNamara ’94, vice president for university advancement at WSU, noted that Dr. Aisiku frequently speaks about how Worcester State faculty put him on a path to success. “Dr. Aisiku’s direct support for student-faculty joint research will not only help students, but also the regional economy. His gift will enhance what we can provide to our science and technology majors at Worcester State and in turn, help fill critical workforce needs in Massachusetts, as our students earn advanced degrees in health, science, and technology-based fields.”

The Aisiku STEM Center will host a new program, launching in 2017, the Aisiku Interdisciplinary Research Team Program. This program will enhance undergraduate research in the STEM fields through interdisciplinary research teams, where students have the opportunity, and funding, to engage in a year-long, pre-graduate-school research experience. WSU students from STEM majors would be recruited in their second year and encouraged to compete for these grants, where they would work with WSU faculty mentors from at least three disciplines. Collaborations with non-STEM fields would also be considered.

Linda S. Larrivee, Ph.D., dean of the University’s School of Education, Health, and Natural Sciences, said this will be a “signature program that will attract more students interested in science and health careers to Worcester State and offer them a unique learning opportunity.”

Dr. Michael VanRooyen, chair of the Department of Emergency Medicine at Brigham and Women’s Hospital, pledged his support for the Brigham-WSU Bridge to Excellence program, a new partnership that will connect WSU students with BWH doctors. He called Dr. Aisiku “a runner” whom you have to run to keep up with.

Dr. Aisiku also said he remembers a mentor telling him, “Time is the most difficult and precious thing we give.” Joseph Girouard, of Leominster, Mass., a biotechnology major in the University’s 4+1 biotechnology B.S.-M.S. program, knows first-hand that Aisiku has taken those words to hear. He served as an Aisiku Summer Research Fellow in 2015. “It felt really good to be with you in Boston,” he said, thanking Dr. Aisiku for the mentoring opportunity.

Other activities the gift will fund include:

The Aisiku STEM Center will also serve as a catalyst for creating new community-based partnerships. In 2017, Dr. Aisiku, in partnership with colleagues from the Brigham & Women’s Department of Emergency Medicine will implement the new Brigham-WSU Bridge to Excellence Program. This program will provide: 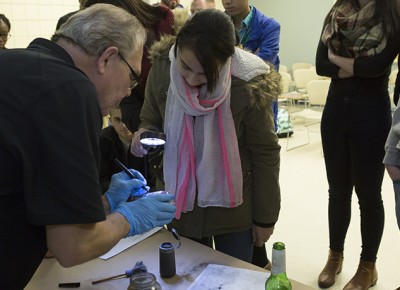 Students in Worcester State University’s criminal justice program visited a crime scene on campus recently—but fortunately it was staged, not real. The Worcester Police Department Crime Scene Unit traveled to campus to talk about investigation procedures, handling evidence, and causes of death, and provided demonstrations of some of the most current techniques used for evidence . . .