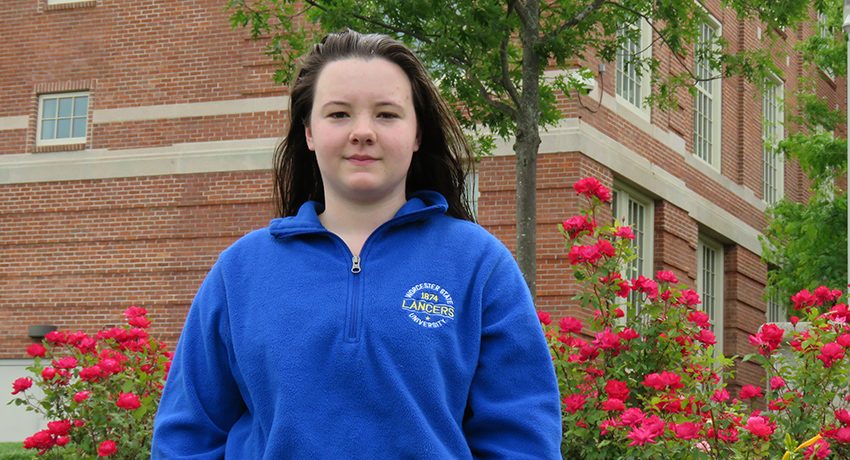 Student Inspires Others to Care about Pediatric Cancer

For sophomore Katelyn Duca, an unsuccessful class presentation sparked a dogged mission to get her fellow students to show support for pediatric cancer care and research. Her efforts resulted in a new student group and a generous scholarship.

The presentation was part of an assignment for her first-year seminar class in the 2017 fall semester. Students were required to “find a movement” to research and share with the class. Duca chose the #MoreThan4 social media campaign, which seeks to get the National Cancer Institute to increase spending on childhood cancer research above 4 percent of its overall research budget.

“Everyone in the class looked really bored, and I was standing in front of the class bawling,” Duca says. “So I was, like, OK, I’m going to do this, I’m going to make people care.”

She went through the Student Involvement and Leadership Development Office to learn how to start a new student club. Along the way, she met the director of the John J. Binienda Center for Civic Engagement, Mark Wagner, Ph.D., who signed up to be the club’s advisor.

The Council for Cancer and Research, which also goes by the name WooCares, was approved as a special interest club by the Student Senate in November 2017 and held its first meeting soon after.

“I realized in the process that I’ve never cared about something as much as I’ve cared about this before,” says Duca, who is double majoring in nursing and public health.

There are 50 students on the club’s email list, Duca says. About 20 students show up for meetings. And a “solid five or six people come to every event that we hold.”

Club members got together in December to make holiday cards for Jimmy Fund Clinic and UMass Memorial Medical Center pediatric patients. The club also organized a visit to UMass to sing holiday carols on the pediatric floors.

Meanwhile, Duca’s niece became ill. “We weren’t sure what it was. We thought it was going to be some kind of blood cancer just because it was so unexpected, so sudden,” she recalls. As she sat with her sister in the hospital waiting room, she noticed that she was only seeing nurses.

In February, the club ran a toy drive called the Valentine’s Day Project: Will You Be My Valentine? “We donated a bunch of toys to UMass. We had such good participation. That was probably our most successful event,” Duca says.

The stories of starting the Council for Cancer and Research and sitting with her sister in a hospital waiting room were the basis of a short video Duca put together as an application for a Taco Bell Live Más Scholarship during the spring semester.

The scholarship program aims to support the “next generation of innovators, creators and dreamers,” according to Taco Bell. The video applications must be about the applicant’s “life’s passion.”

“This year, I thought that I’ve done very good things and I want to keep doing good things so I should apply for it,” Duca says. “Then I made the video, and I won it, surprisingly.”

She learned in mid-May that she had been chosen to receive a $10,000 Live Más Scholarship. (Duca knew about the scholarship from working at a KFC in her hometown of Norwich, Conn.)

Taco Bell is known for giving Live Más Scholarships to graphic designers and videographers “who make awesome videos,” Duca says. “And then I have my little video shot on half Android, half computer, and I won it. It was just amazing! I’m glad that my story made an impact on them. I was going for that.”

She already has plans for the Council for Cancer and Research’s second year. In addition to the three events that ran last year, there will be two trips to Camp Sunshine, a retreat in Maine for children with life-threatening illnesses and their families, and a visit to Dana Farber during the fall semester.

Duca has been working with Sherry’s House, a nonprofit in Worcester that offers support to families of children who’ve been diagnosed with cancer, this summer to organize volunteer opportunities for club members. “They need help with childcare three or four times a month,” she says.

Once she has degrees in nursing and public health, Duca plans to continue on to graduate school to become an advanced practice registered nurse.

“I’d really like to go into pediatric cancer research,” especially research on a terminal form of pediatric brain cancer called diffuse intrinsic pontine gliomas, or DIPG, she says. “It’s a dream, what I aspire to do.”

When Paul Koffi, James Muchiri, and Caitlin Gil-Soto presented the findings of their study, “A Survey of Recovery Services: Addiction, Trauma, and Adverse Childhood Experiences,” to Worcester City Manager Edward Augustus in early June, they were among the nearly 1,870 Worcester State University students who took part in over 160,000 hours of civic and experiential learning at over 260 . . .