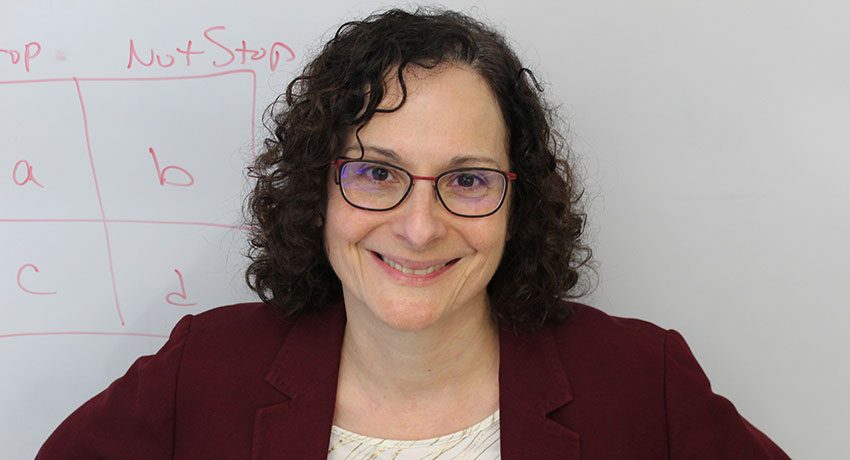 Statistics Students Learning in the Classroom and the Courtroom

Mary Fowler, Ph.D., a professor of mathematics who specializes in statistics, often taps students to help her prepare reports for court cases that show whether there might be evidence of disparate treatment of one demographic compared with another.

It might be a case that involves suspected racial profiling by local police or treating female sex workers differently from the men who engage their services. Fowler regularly is asked by defense attorneys to serve as an expert witness in such cases. Her job is to dispassionately look at the numbers and report back to the court whether the statistics point to possible unfair treatment of a defendant.

Her job isn’t to be a caped crusader for social justice, however.

“Sometimes I find evidence of racial profiling and sometimes I don’t find it, but I don’t have an agenda,” she says. “I don’t come in trying to show that there is disparate treatment, say, with white people being treated one way and black people another. I come in and look at how people are being treated and determine what the facts are.”

Fowler’s experience as a courtroom witness began about five years ago while she was serving as chair of the Mathematics Department. The initial contact came via an email from a local attorney who was looking for a statistician. “He actually sent it out to a number of different university math departments but after we talked, it seemed like we would be able to work together. So I did a case here in Worcester with him and then then word got out,” she says.

That first case was about prostitution. Fowler was asked to comb through reams of police reports to determine whether women and men are being treated in a similar fashion. “A man and a woman, if they enter into a sex-for-a-fee arrangement, they are both breaking the law. So, the question was, ‘Are the women being treated through the legal system in a way that’s comparable to how the men are?’”

In that case, it turned out that the women get arrested more often than the men, she says. To arrive at a solid conclusion, most cases, such as that one, requires sifting through piles of raw data, and that’s one area where students get to experience the practical application of the statistical methods they learn in class.

This case required poring over more than 900 pages of police reports. “So, the interns would enter it and then I would enter it and that way we could check the accuracy of the data bases,” Fowler says. “I had a math student and a student from the Criminal Justice Department. We like to get kids from different departments to work on the cases. The perspective we bring to the case is objectivity, which is different from what the lawyers bring to it. The importance of scientific objectivity is one of the things the students get out of this.”

That objectivity means following wherever the facts lead. “I worked on three cases with a lawyer in Boston and in one of them there was no evidence of racial profiling and in two of them there were,” she says.

And what else do students gain from their experience working with Fowler on court cases?

In addition to her faculty position, the court work, and other statistical assessments, Fowler also is a certified yoga teacher, which helps her quell her nerves during cross examination.

“They can really vary,” she says. “I’ve had some cross examinations where we’re all on the same page and we’re all just trying to figure out what’s going on. And I’ve had others that were ridiculously aggressive, like asking questions that you see in the movies.”

Her sense of scientific detachment from the case’s outcome helps her face the rigors of cross examination, but still she gets nervous every time she testifies. Her study of yoga and its soothing breathing techniques helps a lot.

“As a yoga teacher, I bring it all to the table so I can stay calm and I can stay cool,” she says. “I have the ability to stay focused and articulate under the attack, which is what the cross examination often is.”

One case Fowler worked on questioned whether black drivers were more likely to be stopped than white drivers in a Boston police district. Fowler turned to William Hansen, Ph.D., chair of the Earth, Environment and Physics Department, and the GIS (Geographic Information Systems) lab for assistance. Hansen helped her determine the demographics of the district, which she used to determine if there was disparity involving the race of the drivers that were stopped.

Still, Fowler felt that the method that was used to interpret the statistics might need to be fine-tuned. She was comparing stops from a couple of officers with the demographics of the district, but the question was whether one or more officers had beats in neighborhoods that were predominantly black, which would naturally result in stops of more black drivers.

To find out, Fowler called on the GIS lab and John Holbrook, a lab technician with expertise in mapping. “He looked at where the police officers stopped people so we can understand what their beat really is and then I can make a more appropriate comparison of these officers against the demographics of where they actually work.”

Fowler also collaborates with professors in the Urban Studies department, who help her understand issues around race and ethnicity.

“I think that’s one of the great advantages of being here at Worcester State—the diverse skill sets that come together to work on problems that are really important to our community,” she says. 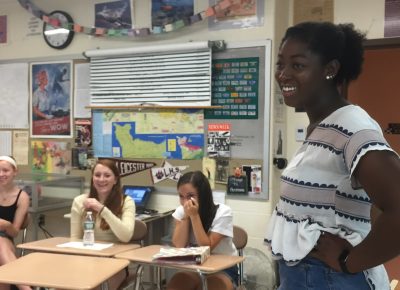 Worcester State University, in partnership with the Edward M. Kennedy Institute for the United States Senate, Leicester High School, and UMass Boston, will celebrate Constitution Day by leading a day long series of learning activities in civic education to better understand democratic processes and debate. The topic for Constitution Day 2018 is Ranked Choice Voting and whether changing the way . . .