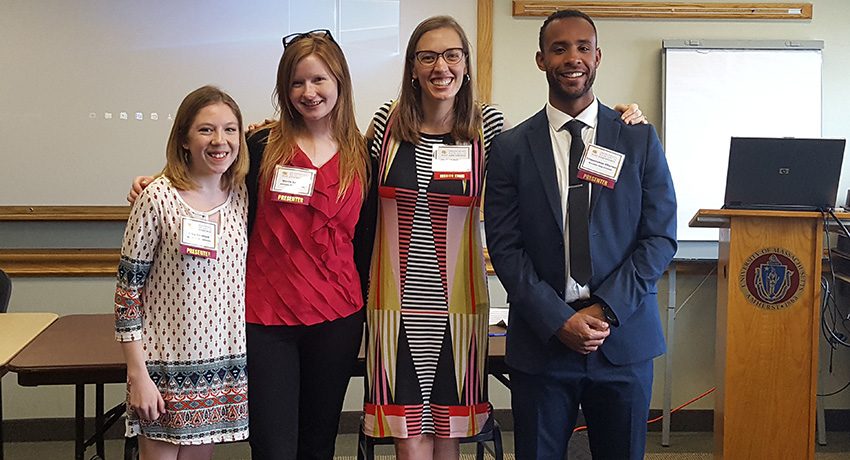 Presenting entirely in Spanish, the students delivered versions of their final research papers written for Assistant Professor of World Languages Elizabeth Osborne’s fall 2017 Survey of Spanish American Literature course. Moderated by Osborne, the panel was well-attended by audience members from a number of Massachusetts schools, including UMass Amherst, Fitchburg State University, and Worcester State. Following the individual talks, students answered questions from the audience and the moderator about the ideas presented.

Gardner began the session with her presentation, “Two Sides: Us and Them in ‘A Roosevelt’ and ‘Coney Island.’” She compared how two well-known writers, Rubén Darío and José Martí, expressed Latin American impressions of and attitudes towards the United States in their works, a poem and a chronicle respectively, at the end of the 19th century when U.S. imperialism was in full swing. Gardner concludes that although the two authors used different genres and focuses, the poem “A Roosevelt” in the case of Darío and the chronicle “Coney Island” in the case of Martí, they both condemn the U.S.’s spiritual poverty as opposed to Latin America’s rich tradition of spirituality.

Following Gardner, Remillard’s presentation, “The active role of the reader in the works of Jorge Luís Borges and Julio Cortázar,” discussed each Argentine author’s literary techniques to actively involve the reader in two short stories. In the case of Borges, Remillard analyzed how the alternating use between the first and third person in the story “Borges y yo” requires an attentive reader. Examining Cortázar’s “Continuidad de los parques,” she discussed how the reader becomes an active character/participant in the story by being positioned as a witness to the characters and their actions.

Villarreal closed the session with his talk, “Challenging Stereotypes in a Patriarchal World: Clorinda Matto de Turner and Rosario Castellanos,” which explored how two influential feminist Latin American writers, Clorinda Matto de Turner and Rosario Castellanos, defied the roles placed upon women by patriarchal paradigms that dominated most of Latin America’s modern history. Comparing essays by each writer, Villarreal explained that while Matto de Turner emphasized the role of education for women while still supporting the traditional roles of women as caretakers, wives, and mothers, Castellanos completely renounced these roles especially in regards to marriage to advocate general gender equality. 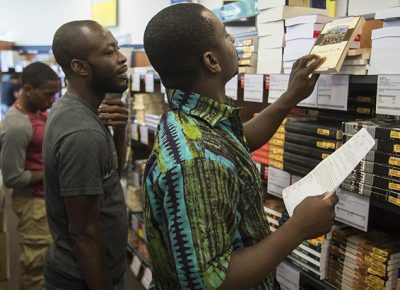 What if students didn’t have to worry about the significant expense of textbooks, but still had access to important academic resources to help them learn? A pilot program encompassing 10 classes this spring semester hopes to answer that question. The results could help change attitudes about traditional academic resources, while saving students thousands of dollars in textbook . . .