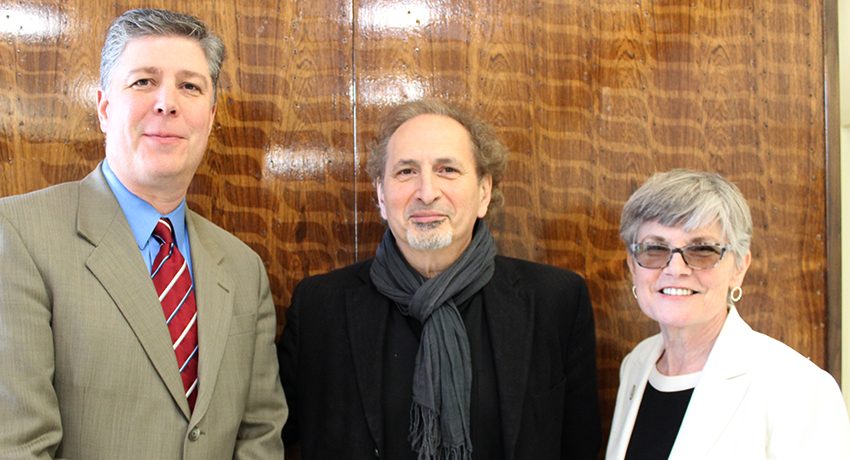 Poetry Can Have a Central Place in Civic Life, says Peter Balakian

Poetry absorbs and reflects so much of the human experience—so much about culture, history, memory, love, the body, art, and God, says Peter Balakian, a Pulitzer Prize winning poet. Then why is it so often regarded as a pleasant but superfluous literary exercise?

The poem “can and should have a much bigger place in civic life,” he said in a talk at Worcester State University April 26. “We have an American culture that is brimming with very talented poets—east, west, north, south—but we don’t exploit their knowledge and the depth of their language-music enough.”

Balakian, who won the 2016 Pulitzer Prize in poetry for his book, “Ozone Journal,” gave a talk titled “Writing for Human Rights: The Crucial Role of Literature in Social Change.” He was the spring keynote speaker and the final lecturer of the 2017-18 Provost’s Series on Democracy and Diplomacy. The event was presented in connection with the Honors Program Author Series and was open to faculty, students, and staff members as well as WSU classes.

In addition to the Pulitzer Prize, Balakian has had two New York Times bestseller list non-fiction books. He is the Donald M. and Constance H. Rebar Professor in Humanities and professor of English at Colgate University, and is one of the foremost experts in the world on the Armenian Genocide of 1915 to 1918.

Associate Vice President of Academic Affairs Henry Theriault introduced Balakian. “This is about the hardest intro I’ve ever done only because I could stand here for the next 45 minutes and tell you great things about Peter Balakian,” he said. “What he does as a poet would be enough for just about any aspiring literary figure in the world, but on top of that, he’s an accomplished scholar. He’s a tremendous political and cultural activist, and a great person who has been of tremendous service to many different organizations.”

“For many of us in higher education, at places like Worcester State University, we are looking at the
cultural and political climate we find ourselves in, looking at the economic climate we are in, and are
challenged to answer the question: What is the relevance of a liberal arts education today?” Maloney said. “To those who say liberal arts education is no longer relevant, I say, it is more important than ever.”

Among topics Balakian discussed was poetry’s unique ability to convey societal violence, such as the trauma of the Armenian Genocide, which claimed the lives of at least one million people at the hands of the Ottoman Turks. In addition to excerpts from a couple of his poems, he read a selection from his 1997 book, “Black Dog of Fate,” a memoir of his coming of age as an Armenian American in suburban Teaneck and Tenafly, N.J., in the late 1950s into the 1960s.

In one way or another, the genocide touched all Armenians of Balakian’s grandparents’ generation. But as he was growing up, “the event was unspoken. It was a taboo. The trauma was so great that the event remained repressed,” he said. “My memoir is an attempt to explore the repression and the silence of living in an all-American affluent suburban culture while the darkness of this haunted past was somehow a force in the room that was never spoken.”

“But trauma is hard to fully repress so the traumatic past would leak through the sunlight of sunny suburbia during various and strange moments that I explore in my memoir,” he said.

Balakian’s maternal grandmother was the only adult survivor in her family in 1915. They had been prosperous silk merchants living in Diyarbakir, an historic Armenian and Kurdish city in the southeast part of Turkey. The Armenians of Diyarbakir were almost entirely annihilated, but she survived with her two infant daughters.

“Her husband was alive for a couple of weeks and died, we don’t know exactly how, on the death march,” Balakian said. “All her nieces, nephews, large family of siblings, parents, cousins—no one remained.”

Balakian said the memoir is, in many ways, more his grandmother’s story than his own.

“My story is the story of the teller,” he said. “She’s the center of the haunted and hidden past that I slowly come to uncover.”

Due to his family’s reluctance to relive the trauma of the genocide by talking about it, Balakian had to learn about it mainly through outside sources. But one family source gave him a rare first-person glimpse into the horrors of the genocide. That came when he translated into English his great uncle’s memoir, “Armenian Golgotha: A Memoir of the Armenian Genocide, 1915-1918.” The New Yorker called the book “fascinating, first-hand testimony to a monumental crime.”

Balakian’s focus isn’t solely on the past, however. He readily takes on the challenging social issues of today, such as race and inequality, and had an opportunity to discuss them with students after the talk.

“We tend to think of poets as aloof or disconnected somehow from society in an ivory tower, not as people who engage with the world in a deep way,” Theriault said. “But Peter goes beyond that to really engage the social issues that demand our attention and action.” 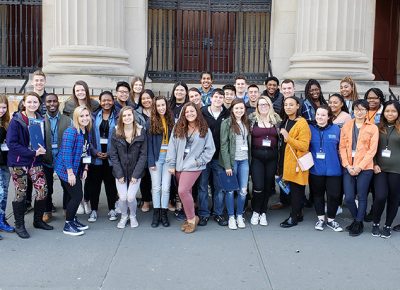 Thirty-four students from the Community Leadership Experience at Worcester State (CLEWS) travelled to New York City, and took part in a community-learning experience at the Mount Olive Baptist Church, led by Michael Eatman and his father, Pastor Charles Eatman, on April 21-22. The CLEWS team worked with children on Saturday, and on Sunday visited the Museum of the City of New York, for a show . . .