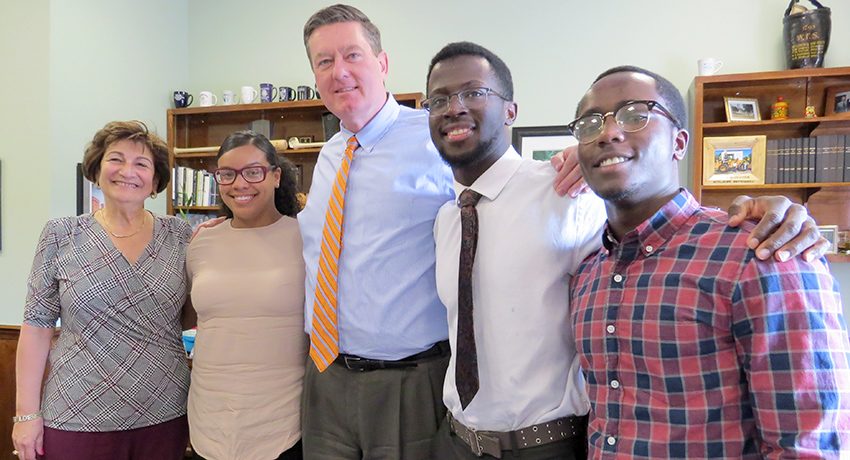 When Paul Koffi, James Muchiri, and Caitlin Gil-Soto presented the findings of their study, “A Survey of Recovery Services: Addiction, Trauma, and Adverse Childhood Experiences,” to Worcester City Manager Edward Augustus in early June, they were among the nearly 1,870 Worcester State University students who took part in over 160,000 hours of civic and experiential learning at over 260 community partners during the academic year.

“WSU is in its second year of tracking courses as civic learning,” he said. These classes represent about 30 percent of all courses taught at WSU.

Massachusetts became the first state to adopt civic engagement as a state priority in 2014. Since then, DHE has moved toward assessing this work by identifying courses with a civic learning or engagement component. Virginia and Maryland are in the process of adding these priorities as well, and there is discussion of comparative analysis between states.

“It is rewarding to see that we not only talk the talk, but Worcester State University students are walking the walk when it comes to engaged citizenship,” said President Barry M. Maloney. “As a core value identified in our strategic plan, it helps define what it means to be a Lancer—someone who is informed and involved in community life in any number of ways.”

“We’re trying to create a climate where there is a civic ethos on campus,” Wagner added. “There is a goal to infuse the curriculum with an expectation that students will be responsible citizens.”

This is in response to the current “civic recession,” he said. “Even in Boston, the mayor’s election had a 22 percent voter turnout. In Worcester’s Main South [precincts], the voting rate is under 10 percent.”

Though not tied directly to voting in elections, Koffi, Muchiri, and Gil-Soto’s survey project related to public policy. It took them out into the Worcester community, required them to analyze the serious issues of substance abuse and incarceration impacting the community, and earned them the chance to present their findings to an influential political leader, the city manager.

Their survey was a joint project of the City of Worcester, Worcester State, and Worcester Academic Health Collaborative. They were guided by Jennifer Hood-DeGrenier, Ph.D., who is the chair of WSU’s Pre-Medical Advisory Programs Committee, Wagner, and Worcester Commissioner of Health and Human Services Matilde Castiel, M.D.

Koffi and Muchiri, who are seniors, and Gil-Soto, who graduate in May, interviewed 55 men and women from three Worcester recovery programs: Reyes House, Everyday Miracles Peer Recovery Support Center, and Jeremiah’s Inn.

Of the 55 people, 75 percent have been incarcerated and 88 percent entered jail before the age of 20, with an average jail sentence of 5.4 years.

The study’s recommendations included trauma-informed care in the public schools as well as counseling for young children with close relatives in jail. In addition, preventive measures such as a pro-inclusion curriculum have the potential to treat adverse childhood experiences before they become behavioral problems in adulthood.

While receiving the students’ recommendations, Augustus informed the students of actions the city is already taking on this issue and noted how a gateway city such as Worcester faces additional obstacles and challenges to family stability, addiction care, and recovery and criminal justice reform.

He noted that awareness of gateway cities’ social issues is vital for economic mobility and regional economic development.

In recognition of these challenges, Koffi, Muchiri, and Gil-Soto recommended a comprehensive approach to family support, prevention, care and management of addictions, and expanding reentry program using community-based strategies.

This was an internship for each student; Koffi and Gil-Soto received financial support from the state’s Internship Incentive Fund. They were among the 95 Worcester State students who qualified for grants from this fund during the 2017-2018 academic year. Each student who received this grant earned an average of $701.50 per credit. 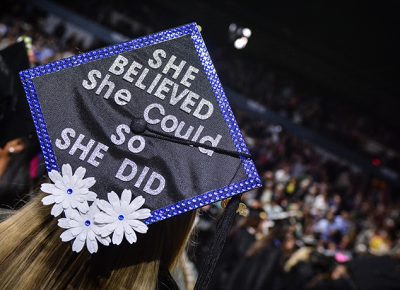 Worcester State University will uphold annual traditions and add some new elements as it holds its undergraduate commencement ceremony on Saturday, May 19 at 10 a.m. at the DCU Center in Worcester with more than 1,200 students eligible to graduate. It will be the first time the university is holding reunion weekend simultaneous with commencement weekend, as well as the first time those . . .