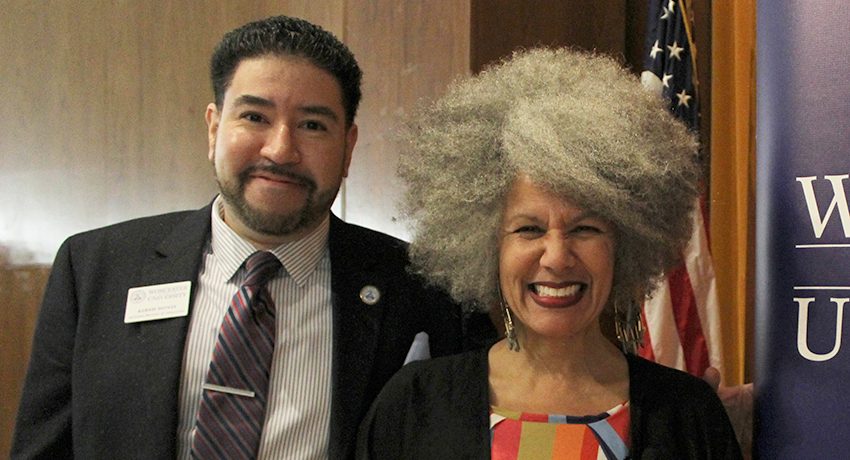 Alumna and Author Speaks About Life as a Transracial Adoptee

Author Susan Harris O’Connor, a 1985 graduate of Worcester State University, offered her perspective as a transracial adoptee to a large group of WSU and Worcester high school students as part of the University’s ALANA (African, Latino/a, Asian, and Native American) Preview Day, whereby admissions staff and other offices on campus collaborate to offer Worcester high school students a glimpse of what life at Worcester State is like, especially for students of color.

The talk—offered in conjunction with the national African-American Read-In—was a highlight of the day’s events. For the Read-In portion of the day, students read and discussed excerpts from literary works by African American authors. O’Connor’s topic is the subject of her most well-known book, “The Harris Narratives: An Introspective Study of a Transracial Adoptee.”

Adoption advocacy groups say 73 percent of non-Caucasian children are adopted into Caucasian families, so there are many people for whom the questions that O’Connor raised matter very deeply. She offered insights on those concerns and many others Feb. 14 in the May Street Auditorium. Among the audience were about 95 juniors from Worcester Public Schools, invited guests who were encouraged to ask questions after O’Connor’s presentation.

“Transracial adoption is usually defined as the adoption of a child from a race different from that of the adoptive parents,” Professor of English Charles Cullum, Ph.D., said as he introduced O’Connor. “This is an issue that affects a growing number of individuals and families, and more and more research is being done about the psychological and emotional health of these children. Of particular interest is the ability of these adoptees to develop a stable sense of their own identities.”

It is to that question that O’Connor, a licensed social worker, has devoted her life, professionally and personally. In the “Harris Narratives,” O’Connor writes about her experiences as a foster baby of Black, Caucasian, and Seminole heritage who was adopted by white Jewish parents in the early 1960s.

For O’Connor, writing autobiographical narratives, ultimately enough of them to fill a book, helped her make sense of her complex identity and overcome feelings of inferiority she once held stemming from her childhood and the impact of institutionalized racism. In her talk, she spoke about about how those narratives came to be and read excerpts from the book.

“It was really complicated for me,” she said. “When I was your age I kind of cruised through. Then, all of a sudden, I would say in my mid-20s, I started to have questions about what I was, who I was, where I belonged, where I fit in. It was very confusing.”

Her first time writing a personal narrative came many years ago when she was asked to be on a panel at Yale University for a debate on whether white parents could raise children of color. “I was going to be on a panel with four law professors and I was, ‘What on earth am I going to say there?’” she said.

She decided she would try to express her vision of what racism looks like for a person of color based on her own experiences and what she had heard from other transracial adoptees.

O’Connor worked hard preparing her speech, which later became one of the autobiographical narratives in her book. She read an excerpt at WSU, explaining that she asked the Yale audience if they had ever imagined what it would be like living in a town where no one else had your skin color or similar facial features or where, most days, “you never encountered a person who looked like you? That even your own parents would have been of a different race from you? Can you imagine?”

She asked the Yale audience to also imagine a sense of separateness as a permanent state, not like it was some exotic vacation away from the comforts of home, from which you could always return to a family that looks like you, and where you could “find a person who will understand you, mirror you, and once again remind you that you are OK being the way you are.”

The Yale talk continued in a similar strong way, and when it was over, the audience of law professors was obviously impressed.

“Guess who was in my audience—probably about 398 white people. And they were, like, whoa, whoa, whoa, whoa, whooaaaa. After I presented my 17-minute piece, they were calling me Dr. Harris,” she said, even though the highest degree she actually has attained is a master’s degree.

Among encouraging advice O’Connor gave the students at WSU was to work to improve their writing skills to help them sort out any inner challenges and as an entrée into just about any type of employment. She told them that, although good writing is hard to do, they should not give up trying.

“I had never done anything like that before,” she said, of her Yale essay. “I had never even written a poem before.”
Since the 1990s, the National Council of Teachers of English and the Black Caucus of the NCTE have promoted African American Read-In Day to encourage schools, universities, and churches to celebrate literacy work by African American authors.

Co-sponsors of the talk at WSU included the English Department, Admissions Office, Office of Multicultural Affairs, and History and Political Science Department. It was part of WSU’s celebration of Black History Month with several events throughout February. 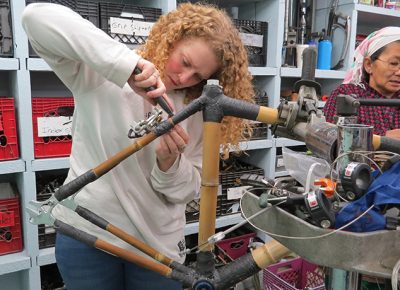 It takes a village to build a bicycle. A collaborative project to build bicycles out of bamboo took place over three days in January, bringing together intergenerational teams of students, alumni, and local refugee artisans to create reliable transportation out of bamboo, a sustainable and recycled material. The workshops took place at the Worcester Center for Crafts, a WSU partner and . . .